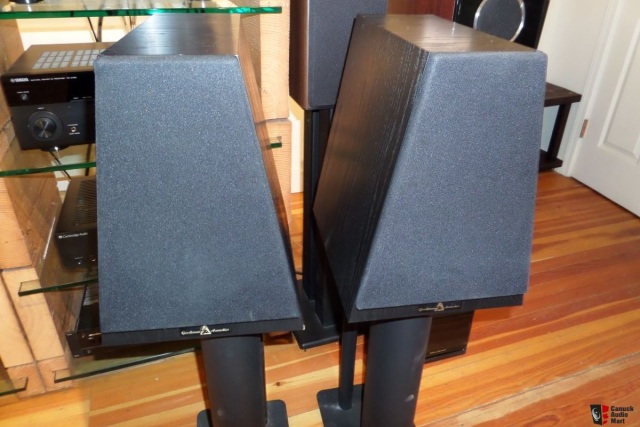 Gershman Acoustics X-1 Stand Mount Loudspeakers. These are manufactured in Canada and are about 20 years old.

The grills show some signs of age and the cabinets do have some small marks, according to the Canuck Audio Mart rating scale they would be about a 7.

Prefer local sale as we do not have the original boxes and due to the shape they would be more difficult to ship than a traditional box shape speaker.

Here is info from the web, a Soundstage review:

The X-1 is 15" tall, 11" wide and almost 14" deep, weighing in at 27 pounds. Both the left and right cabinet walls slope toward a smaller top panel, giving the speaker the look of a truncated pyramid. The resulting design is visually enticing and has benefits such as increased strength and rigidity and diminished internal standing waves. The cabinet walls are over 1" thick, and the construction is more intricate than it appears. Each panel is actually two 1/2" MDF panels with a special damping material in between. The purpose of this is to create an improved wall structure with better performance than simply using solid MDF panels.

The tweeter is a 1" Vifa dome and the woofer is a custom-made 6" job, with porting of the speaker done out the back. Regarding the drivers, I had an interesting listening opportunity when visiting the Gershman factory in late 1997. Eli was doing final design work on the X-1 and had two identical models built except for the woofer drivers. One had a 6" Vifa woofer and the other the 6" custom-made woofer used in the standard production. He showed me the computer measurements of each woofer, which proved almost identical. However, upon listening it was obvious that the custom-made driver sounded better in this design and subjectively gave the impression of greater bass weight despite measurements that showed no difference in actual extension. Obviously, that’s the driver he chose to use.

Like with all Gershman loudspeakers, first-order crossovers are used. Gershman-supplied measurements indicate a -3dB point at 40Hz, a sensitivity of 87dB, and an impedance nominally rated at 8 ohms. In general, the X-1 is an easy load that most reasonably powerful amplifiers will have no trouble with, and it will therefore fit nicely into systems that start in the budget range. The X-1 comes ready for biwiring, with its high-quality posts, although I used the speakers single-wired for the entire time.

The overall fit and finish is up to the standards set by the rest of the Gershman line—that is to say, exceptional.