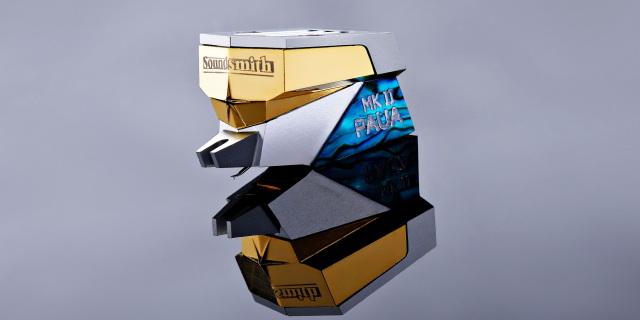 The NEW Paua MKII: adorned with sea shell to remind us of the beauty of the sounds of the world all around us. Nature healing nature.

The Paua is one of Soundsmith's most highly regarded top of the line low output cartridges. It has won numerous accolades and praise from users and reviewers around the word, including an “Editor’s Choice Award” in 2015 from TAS. Now we introduce the new Paua MKII, employing a newly developed Aluminum alloy used to fashion the MKII's cantilever into a precision acoustic and mechanical lever. It features stiffness in the ranges required, while providing critical damping in other sections of the acoustic spectrum. The reult is an even better Paua, a cartridge that gets raves from its owners, and can be fully rebuilt many times for $725 - a fraction of its original cost - as with all Soundsmith cartridges - 20% or less.

Featuring ultra-low internal moving mass, a specialized telescoping newly developed alloy cantilever and highly polished low mass nude Contact Line stylus, the Paua MKII will add a unique quality of warmth and smoothness to any analog system without leaving behind all the delicate musical details you want and need to hear. The Paua MKII reaches new heights of stylus control and performance, as is confirmed by its incredibly high channel separation figures.

We have accomplished a work of art with the Paua MKII design, resulting in an unparalleled and sublime performance.