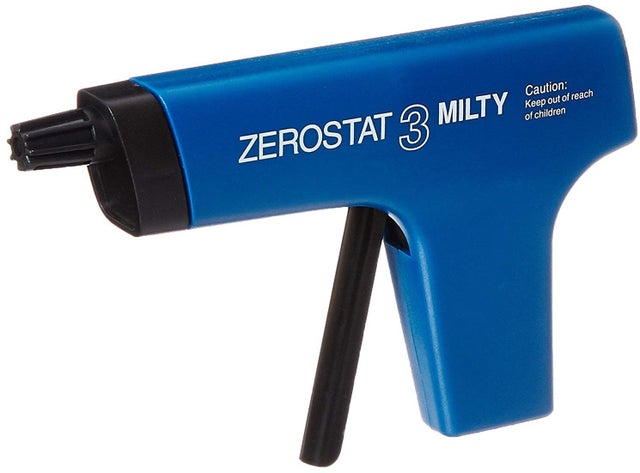 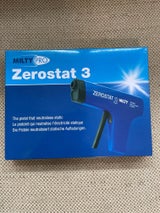 Blast Away Static for Better Sounding LPs and CDs

Static electricity is an LP owner's enemy. It's what attracts dust and dirt to vinyl, and they can damage the surface over time. Sure, you can clean away debris, but why not help prevent it accumulating in the first place?

Zap static with the Zerostat from Milty. A couple of trigger pulls does the trick. Zerostat 3 is the latest version of the original piezo-electric antistatic pistol that's been an audiophile favorite for years. It reduces static on insulating surfaces such as phonograph records, film negatives, and more.

In fact, the Milty Zerostat is so effective that laboratories involved in producing scanning electron microscopy images use the Zerostat 3 to eliminate dust clinging to materials being imaged due to an electrostatic charge. Labs also use the Zerostat to keep dust off glass, lenses, samples, instruments, and other laboratory gear. If Zerostat 3 works so well in critical laboratory applications, you can definitely rely on it for your audiophile needs!

How to Use the Zerostat 3

Zerostat 3 produces negative and positive ions that couple with the positive and negative static charges on the surface of your LP, effectively neutralizing static electricity.

Just hold the Zerostat pistol so that the end of the pistol is about 12 inches away from your LP. Squeeze the trigger slowly, and a powerful stream of positive ions projects over a spread of about 16 inches. Release it slowly, and negative ions are produced. It's just that easy! This little gizmo generates a lot of charged ions, so make sure you don't pull the trigger while pressing the end of pistol against your body, or you'll get a painful zap.

Helpful Tip: Make sure you hear 'clicking' from the Zerostat as you slowly pull the trigger. If you don't hear any clicks, you aren't squeezing and releasing the trigger slowly enough, so try it again, but not as fast.

Regular use of Zerostat 3 can release dirt and dust on records, eliminating pops and crackles caused by static 'hot spots.' It's also ideal for reducing static charges on CDs, Blu-ray discs, DVDs, and more.

Zerostat 3 is constructed of durable hard plastic material. It's built to last, too, and is good for at least 50,000 trigger operations. Best of all, it requires no power supply, batteries, or refills of any kind. The two piezo-electric crystals contacting one another via the trigger mechanism generate the charged ions without need of a power supply.

Zerostat comes with full instructions for use, plus includes a special ion-indicator which shows you that Zerostat is working. Just plug the indicator into the end of the 'pistol,' squeeze the handle, and a small neon tube will gently glow red.